That cats can enjoy more freedom through the cat flap door, they owe to the inventor Sir Isaac Newton. The natural scientist and cat lover felt disturbed by his cats’ wayward going out times, so he devised a solution. He sawed a passage in his door and provided it with a flap: the cat flap door was invented. Today there is a wide range of cat door made of plastic or wood for large cats and small cats and with technical equipment such as a cat door chip detection, timer or mouse detection.

If your cat is an outdoor cat and you don’t always want to open the door, it’s worth installing a cat flap so that the cat can go out or come in independently when it feels like it. If you live in a rented apartment, you must first obtain permission to install the cat flap. You can get simple cat flaps for as little as around $10. Cat flaps with app control, chip and timer can cost up to $200.

The classic cat flap door works like a swinging door. The cat bumps the flap with its head and the flap opens. The cat slips through. The flap closes again. To prevent the cat flap from opening mechanically due to drafts, seals are installed. Another type is the cat flap with magnetic collar. The cat also wears a magnet on the collar, which deactivates the locking device of the cat flap when approaching. The mechanical cat door is a cat flap with 2-way system with the functions in or out. The flap is also lockable. Cat door with 4-way system extend the functions in and out to “only in” or “only out” in the test. This is advantageous if the cat is to remain in the house at a certain time. Cat doors with 4-way system are better heat insulated than cat flaps 2-way system. The disadvantages of a mechanical cat flap are that any other cat or animal that fits through the cat flap can get into the house. The advantages are that it is easy to use and inexpensive. To avoid drafts, you should choose an insulated cat flap. 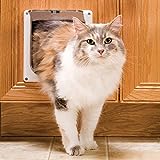 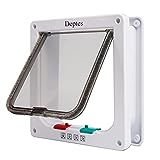 This type of cat flap door recognizes a microchip and opens only after chip recognition. Cat door with microchip how does it work? The cat flap opens as soon as the cat with chip implant comes within the range of chip recognition. In some cat flaps with chip you program up to 32 different chip numbers. Likewise, chip-controlled times can be set in which the cat should remain in the house. For cats that are not chipped, manufacturers include a collar with a chip. However, the collar can also get tangled in the cat flap or the cat is locked out if the chip recognition with collar does not work. For the chip you need a battery as a power source. A chip implant under the skin is therefore always the first choice, also to find the cat again if it is lost once. How do I store the chip in the cat flap with chip recognition? In the test, press the appropriate button on the cat flap when the cat walks through. Then the chip of the cat is stored. Furthermore, there are electronic cat flaps with infrared sensor. You need batteries for the sensor in the frame of the cat flap and the cat must wear a transmitter with battery on the collar. If the batteries are dead, the cat flap will not work. A cat flap with microchip is always thicker than a normal cat flap. A cat flap chip and timer already exists. A cat door with chip and mouse recognition however not so far. Although students have already developed a corresponding model. However, it has not yet been implemented.

The size of the cat flap door

Large cats need an XXL cat door, often even a dog flap for small dogs to fit through. Important when buying cat flap are the dimensions from the distance from the paws to the head and the shoulder width of the cat.

Which cat flap door is quiet?

If the cat flap has a brush strip, then the cap opens and closes particularly quietly. Electronic cat flaps with a seal made of felt are also considered quiet.

Installation in a door made of wood is less complicated than installation in a glass door or window. For installation in windows or glass doors, it is best to consult a glazier so that there is no glass breakage. For a wall breakthrough, you need to find an appropriate craftsman locally or on the Internet. If you are handy, you can install a cat flap yourself if the door is suitable.

Not only the installation, but also the place of installation are important. If the cat does not feel safe after leaving the cat door, it will not use the cat flap. Cats may feel uncomfortable if they enter an open area from the cat flap. It is better if plants or bushes screen the cat flap. Low canopies are also avoided by cats because animals could hide there and ambush the cat. It has proven to install the cat flap at about belly height of the pussycat. If this is not possible, you should place a step in front of the cat flap. Door handles and window handles must not be accessible through the cat flap. Otherwise, your home’s insurance coverage may be voided. If this cannot be avoided, door and window handles must be additionally secured against burglary. Do not forget: The cat flap should also not be visible to other curious cats.

Installing a cat door: The cost

Depending on the installation in windows or balcony doors and depending on the type of glazing, you must expect costs between $100 to $400 for the installation, according to the craftsman portal MyHammer. Especially when installing cat flap glass door, a professional is preferable, so that the house does not cool down due to incorrect installation. When choosing the right cat flap for the glass door double glazing, the thickness of the frame and the type of glazing play a role. Quite problematic is an installation with insulating glass, which then loses its insulating function. In the case of a normal balcony door with cat flap or installation in the patio door or balcony door with cat flap, the glazier cuts an appropriate recess for the cat flap in the glass. The cost of installation balcony door, patio door or window is about $100. In the case of double glazing, the cost increases during installation, because in the case of double glazing, two panes of glass must be cut, and in the case of triple glazing patio door – three panes of glass. However, as a rule, the glazier removes the multiple glazing and replaces it with a pre-assembled glass pane with a heat panel and an opening for the cat flap, and stores the previous glazing. The size of the glass panel also affects the cost.

A cat flap for the screen door has a particularly narrow frame. With some craftsmanship, you can install the cat door yourself by cutting an opening in the appropriate place in the insect screen. The attachment of the cat flap to the insect screen is done with the help of screws.

Installation is recommended either in the window in the kitchen or in a bathroom window, because there is less heating in these rooms. Because the opening for the cat flap window is an irreversible process, a professional craftsman in a window triple glazing or window double glazing often decides to make a replacement window and store the original window. Accordingly, the cost of new manufacture and installation increases. Installing a cat flap with chip window is worthwhile only on the first floor, because the cat could injure itself at a greater height when using the cat flap. Unless the cat is allowed to get fresh air on the balcony with the balcony door fly screen door with cat flap. For a skylight, you need to buy a cat flap skylight.

Is there a cat flap without damaging the window? Have a pane of Plexiglas cut to the size of the window with a hole for the cat flap and use the Plexiglas instead of the glass for a window with an integrated cat flap.

Which cat doorfor the passive house?

You need a cat flap insulated, which eliminates the formation of cold bridges. Good examples are the Cat Mate cat flap with chip or the SureFlap cat flap. They close the opening airtight and have heat insulating properties. Even during heavy rain or storms, the cat door will not open. This cat flap with chip is suitable for installation in windows, doors and walls.

The installation of a cat flap is a structural change. Therefore, you must ask the landlord for his permission before starting the work. Have the permission in writing to prevent later misunderstandings. At the latest when you move out, you must restore the original condition if installation has been permitted. If the installation is not allowed, a motion detector may be an alternative. This emits a sound when the cat wants to enter. The motion detector is placed where the cat normally waits to be let in. Especially for cats, motion detectors are also available for doormats under the term “cat bell”.

Whether the cat flap you are installing is a cat flap door or window: High quality cat flaps have a narrow frame. A cat door for insect screen door fly screen door the frame is even narrower. Thus, the flap does not take up much space and there is enough room for the cat to slip through. For the window and glass doors, white and transparent frames are best. When buying, pay attention to whether the model is also suitable for glass doors and windows. Cat flaps for front doors and wooden doors must have a wider frame than a cat flap for glass door, double glazing or cat flap for insect screen. The safest against uninvited guests is a cat flap with a chip, such as the SureFlap microchip-controlled pet flap. It opens only for the registered chip number. If you are a homeowner, you can replace the front door without a cat flap with a front door with a cat flap and put the other door in storage for the time being. Better than at the front door is an installation of the cat flap in the basement at a cellar door leading to the outside or at a cellar window, because in the test there according to experience the least heat is lost.